Inna Lillahi Wa Inna Ilaihi Raji’un. From Allah we came and unto Him we shall return. Death is certainly inevitable for any mortal.

No mortal would forever remain on the earth. This has been the beginning since the time of Prophet Adam(AS) and Eve, down to the Seal of the Prophets, Muhammad (SAW), and to eternity, which only the Alpha and Omega, the Almighty Allah knows. Ameeen.
Alhamdulillah, as Muslims with unwavering belief and faith in Qadr, fate, death is always unquestionably accepted. Indeed, there were times we were born and there will be times we MUST exit this temporal world. That is when the curtain certainly falls on us. In shaa Allah, we are fervently praying that whenever it does, it will be a happy ending for us.
Allah the Almighty says, “Every self(life) will taste death. You will be paid your wages in full on the Day of Rising. Anyone who is distanced from the Fire and admitted to the Garden, has triumphed.

The Almighty says, “When their specified time arrives, they cannot delay it for a single hour nor can they bring it forward,”(16:61). 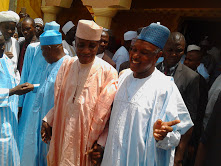 And the Almighty says, “O you who believe! Do not let your wealth or children divert you from the remembrance of Allah. Whoever does that is lost. Give from what We have provided for you before death comes to one of you and he says, ‘O Lord, if only you would give me a little more time so that I can give sadaqa and be one of the righteous.’ Allah will not give anyone more time, once their time has come. Allah is aware of everything you do.” (63:9-11) Ibn ‘Umar said, “The Messenger of Allah, may Allah bless him and grant him peace, took me by the shoulder and said, ‘Be in this world as if you were a stranger or a traveller on the road.” Ibn ‘Umar used to say, “In the evening, do not anticipate the morning, and in themorning do not anticipate the evening. Take from your health for your illness and from your life for your death.” [al-Bukhari] This was corroborated on 14th July, 2017, following the divine call on the late House of Representatives member, Alhaji Abdullahi Muhammad Wamakko, aka Speaker. He died on that fateful day at the Nizamiya Hospital in Abuja, after a brief illness.
The remains of the late lawmaker who was born on 4th January, 1967, were later in the day brought to Sokoto, via the Sultan Abubakar III International Airport, Sokoto, en route Wamakko, his ancestral home, where he was buried. He was buried according to Islamic rites after a funeral prayer led by the Chief Imam of Wamakko, Sheikh Shehu Ardo. 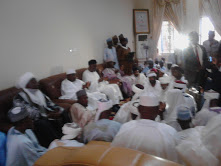 The funeral prayer was attended by thousands of relatives, friends, associates and sympathizers who thronged the Wamakko Central Jumaat Mosque, to attend the reward-fetching prayer attended by a multitude of people that cut across all ages, both the high, mighty and the low.They included his elder brother, Senator Aliyu Magatakarda Wamakko, the Sarkin Yamman Sokoto and Marafan Hausa, Governor Aminu Waziri Tambuwal, his Deputy, Alhaji Ahmed Aliyu Sokoto, APC National Vice Chairman, North West, Alhaji Inuwa Abdullahi, members of the
National and State assemblies, politicians, civil servants, technocrats and an array of several others, from within and outside the state. Thereafter, the mammoth crowd of mourners and sympathizers who ceaselessly trooped to Sokoto state, en route Wamakko town   all in the bid to condole and console the family, relatives and associates of the deceased on the irreparable of a giant and a political colossus, the late Abdullahi Speaker as he was fondly called, was howeverheartwarming,
However, the list of attendants is indeed endless and inexhaustible.
While, some came physically, others sent messages and emissaries,‎ others were there all through the three-day mourning period which had to be extended to four days sequel to the high number of people who continued to troop to Wamakko.
Among messages of condolence received were those from the C-In-C of the Federal Republic of Nigeria, President Muhammadu Buhari, his Nigerien counterpart, President Muhammadou Isoufou, former President Ibrahim Badamasi Babangida, former Vice President Atiku Abubakar, former and serving Governors, politicians, business moguls like the Katsina-based Alhaji Dahiru Barau Mangal, serving and former National and State Assemblies’ members, among thousands of others. In one of such messages, is that of the Senate President and Chairman of the National Assembly, Dr Abubakar Bukola Saraki, who led other Senators and members of the House of Representatives in which he condoled Senator Aliyu Wamakko( APC-Sokoto North), over the loss of his younger brother, Alhaji Abdullahi Wamakko( APC-Kware/Wamakko), between 2011 to 2017.
He was accompanied to Wamakko town by Governor Aminu Waziri Tambuwal including Senators Danjuma Goje, Kabiru Gaya and Bashir Garbai.
Saraki described the deceased as a patriotic, dedicated, God-fearing,
honest and a detribalized Nigerian.
The Senate President said:” the late lawmaker served his constituency, Sokoto state and Nigeria creditably.” He was also industrious, hard working, obedient, patient and persevering.” It is with great heart that we come here on behalf of the Senate and National Assembly to condole you.” Whatever affects you in grief and in joy, affects us as you are a great leader to Nigeria and Nigerians.”
Saraki further prayed God to repose the soul of the late lawmaker and for Him to grant the family the fortitude to bear the irreparable loss. Responding, Wamakko described Saraki as great and true leader to Nigeria.The former governor of Sokoto State further said that the Senate President is a symbol of courage and hope for Nigeria. Also, the Chairman of the Nigeria Governors’ Forum and Zamfara state Governor, Alhaji Abdullahi Yari, has condoled Wamakko. Similarly, the National President of the Jama’atul Izalatul Bid’a Wa Iqamatus-Sunnah( JIBWIS), represented by Sheikh Habibu Kaura, has condoled Wamakko.
The Director-Genenral of the National Youths Service Corps( NYSC), Brigadier-Gen. Zakari Kazaure, representd by the state coordinator, Alhaji Musa Abubakar, has also condoled Wamakko. The late Abdullahi Speaker who DILIGENTLY represented Kware/ Wamakko Federal Constituency was first elected and sworn in on 29th May, 2011, then under the Peoples Democratic Party. In 2015, he was reflected under the All Progressives Congress ( APC),until his demise on July 14th, 2017. He was a member of various all-important committees of the House of Representatives. They included: Banking & Currency, Commerce, Drugs, Narcotics & Financial Crimes, Federal Capital Territor, Governmental Affair, Healt, House Services / Welfare, Navy, Special Duties and he was the Vice Chairman, House committee on FERMA.
The deceased is survived by a wife and five children. May God bless and see them through life, amen. The above were just excerpts of the heart-soothing condolence messages from a myriad of Nigerians, from across social strata and diverse political leanings. It was an indication that the deceased came, saw and conquered.
It was indeed a happy ending for him and we will continue to pray for the repose of his soul until we meet to part no more. ADIEU, ALHAJI ABDULLAHI MUHAMMAD WAMAKKO, aka SPEAKER. Mani is the Special Assistant to Senator Aliyu Magatkarda Wamakko on Media and Publicity
Share
1
SHARES
ShareTweetSubscribe