Frontline contender in the November 18, 2017 Anambra Governorship election Chief Osita Chidoka, has said that he is deeply touched by the widespread solidarity, prayers and goodwill he has continued to receive from the masses ahead of the election. 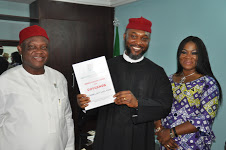 Chief Chidoka stated this on Thursday in a thank-you message to his supporters comprised of a large crowd of various women, youth and professional groups from Anambra state who accompanied him to pick his nomination form at the National Secretariat of the United Progressive Party (UPP), on Monday.
Chief Chidoka said the continued outpouring of goodwill, prayers and support towards him since his public declaration is a firm testimony to the confidence reposed in him and the solid bond existing between him and the people, especially those at the grassroots across Anambra state.
According to him, “I deeply appreciate the continued outpouring of support, solidarity and goodwill from our people across every nook and cranny of our dear state, and the confidence they repose in me.  Indeed, I am particularly grateful and inspired by the flow of prayers as well as countless messages of encouragement, hope and faith from ndi Anambra as well as physical demonstration of solidarity towards me ahead of the elections.
“I am specifically challenged by the sacrifices, contributions and the labour of love by our people across all divides as they dedicate their resources; working hard in one way or the other to ensure that we actualize our goal for the good of our state.
“I am proud of ndi Anambra and I believe in our future as a people. I will continue to stand for the people and with them, to ensure that we accomplish our mission to institute a resourceful and transparent administration with a conscience; a government that stands for the people and lifts burdens off their shoulders; and where the forgotten, the poor, the disadvantaged and the ordinary citizens are the ultimate beneficiaries of government activities and projects”, he said in the message.
Furthermore, Chief Chidoka commended the leaders and all the members of the UPP for their resilience, adding that it is clear that the party is the only political platform through which the people of Anambra can achieve their yearning and aspirations.
Share
0
SHARES
ShareTweetSubscribe