Journalists in the country have been called upon to uphold the true ethics of the profession by been balanced, accurate and fair in their reporting. 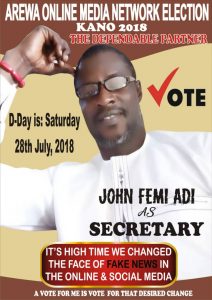 This plea was contained in a release signed by Nasir Dambatta and John Femi Adi indicating their desire to run for the offices of Chairman and Secretary in the forthcoming elections of the Arewa Online Media Forum scheduled for July 28, 2018 in Kano.

They said it has become imperative to put professionalism first as the profession has consistently received bashing from all walks of life for bad reportage and lack ethical practice.

“There is urgent need to professionalize Online media as an institution of public service and to ensure that the ethics of fairness, balance and accuracy are upheld.”

“We would also like to use this forum to pledge our desire to make sure that the basic tools of practice are adhered to if given the opportunity to serve this honourable Online Media Forum,” Dambatta emphasized.
According to Mr. Adi, this received enough insults as a result of unethical practices and the employment of quacks into the profession described as the forth arm of government.

“We need to rid this noble profession quacks by bringing back true professionals. This is why the Federal Government is trying to reduce power of the press, so we have to put our house in order to avoid this move.”