Late Taraba Governor, Pharmacist Danbaba Suntai, has on Saturday August 19, 2017, finally laid to rest‎ at his country home, Suntai village in Bali Local Government area of Taraba State. Suntai who died on June 28, 2017, in Houston, Florida, in the United States following the injuries sustained from the plane crash. He crash landed near Yola airport on October ‎25,2012. Since then, he has been undergoing rehabilitation.

The last burial activities ‎which took place at Jolly Nyame Stadium, Jalingo, attracted many and high profile personalities from all walks of life, who came from different part of the country to pay their last respect.
Among the dignitaries who were in attendance; Ayodele Fayose, Governor of Ekiti state and Chairman PDP Governor’s forum; Governor of Plateau, Solomon Danlung; Governor of Gombe State, Alhaji Ibrahim Dankuwambo and the host Governor, Arch. Ishaku Dickson Darius. 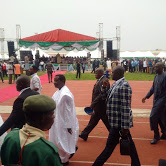 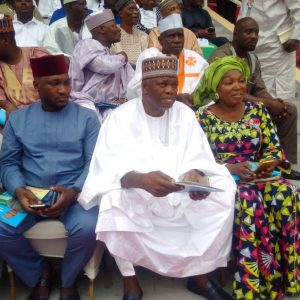 Speaking with our reporter, Barr. Dave, described late Danbaba Suntai as a great lost. Adding that the party has lost a great hero. “We as a party, we have lost a great leader and a hero, a man with developmental strides. What you are seeing in Taraba State today originated from him. We as a party and on behalf of my Chairman Alhaji Ahmed Makarfi, we condolened with the people of Taraba State and we also want the current government to continue with his legacies”.
In the same, the Governor of Ekiti state, ‎Gombe, plateau both described late Danbaba Danfulani Suntai as a great hero, a detribilized Nigerian and a true leader. Adding that Danbaba was a humble man, a listener, a leader with out a bias mind. That he welcomes and embraces all religions. They both advised the current governor, Arch. Ishaku Darius to continue with his legacies.
In his address, Governor Ishaku Darius, thanked the people who came from far and near to honour the death and burial ceremony of their beloved son, brother, uncle, colleague and a friend. He pointed that Mr. Danbaba was not just a Governor of Taraba State but he was a brother to all Tarabians. He added that Taraba people will not forget the legacies he has laid. “We the Tarabians, I don’t think there is anything we can do to recover this great lost. We all pray that his soul will rest in perfect peace”.
The funeral services held at Jolly Nyame Stadium, was an interdenominational church service.  The service witnessed all sorts of presentations in his honour. Ranging from Drama, special songs presentations and the boys bragged parade.
‎Shortly after the service, his body was conveyed by family and friends and well wishers to Suntai village where he was finally laid to rest at his family compound.
Share
0
SHARES
ShareTweetSubscribe