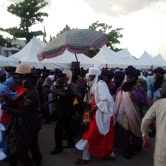 The Governor of Gombe State, Alhaji Ibrahim Dankuwambo has assured none indegenes living in the  state of their safety and freedom to live in any part of the state without fear. Stating that Gombe State is for every Nigerian whether you are Igbo or yoruba.
He stated this while addressing a mammoth crowd who came to facilitate Sallah with him at the Government house.
The Governor who argued the people of Gombe State to use the Eli-El-fitr celebration to maintain peace and harmony with one another. He added that Muslims should emulate the teaching of Prophet Muhammed, which centres on peace, unity and love for one another.
The Governor also maintained that Gombe State has been enjoying peace despite the security challenges in the country. “Gombe State is among the most peace states in the north east part of the country. I want that peace to continue. I will do every thing within my capacity as the chief security of the state to ensure that that peace did not elude us”.
He called on the people to remain calm as he stands resolute to ensure that his administration delivers the development needed for the well-being of the state and the people.
The Governor also called on all Nigerians to pray for the health of Mr. President, President Muhammud Buhari. That God should grant him quick recovery. Pointing that Nigerians heard the audio voice of Mr. President yesterday, saying that the voice was very low but with the prayers ‎of all Nigerians he believes that Mr. President will have a speeding recovery.
Share
0
SHARES
ShareTweetSubscribe