By Ado Hassan, Sokoto
Following his defection from the opposition Peoples Democratic Party(PDP) to the ruling All Progressives Congress(APC), former Minister of Transport, Yusuf Suleiman yesterday, formally registered with the party at his Isa South ward in Isa local government of Sokoto state. 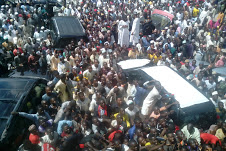 He was issued his membership card No: 381113 by the state Chairman, Ahaji Sadiq Isah Achida who led a team of party officials.
‎However, speaking at the formal exercise witnessed by thousands of APC supporters, Achida noted that Suleiman was a worthy politician with relevance to the ruling party and people of his constituency as well as Sokoto state.
He ‎said the party had stem it’s popularity across the state and in Isa and Sabon Birni.
” It’s time to demonstrate your love and passion for the former Minister”, he urged.
Achida‎ disclosed that President Muhammadu Buhari has assured the people of Isa of the Federal Government commitment to link the axis with rail transport services.
He however, told the crowd to collectively‎ support the President’s aspiration and all APC candidates.
“Buhari is not corrupt. He is impeccably recognised for that world wide.
” He is the most trusted and loved politician in the North and Nigeria”, he pointed.
In his brief remark, Yusuf Suleiman ‎who was speechless due to he warm reception accorded him said ” I don’t have anything to say but soon I will make time to deliver my message.
” I sincerely thank everyone for the solidarity and home coming into our party”, he concluded.
Share
0
SHARES
ShareTweetSubscribe