The 39th Kaduna International Trade Fair has come and gone with its memory. One memory that most visitors will remember for a long time is their visit to the Zaria Academy pavilion where most visitors had contact with the creative innovations of young Nigerians from the JETS Club of the school.

Apart from the Robotics developed by Mujaheed Ali Goni, The Trafficking Management System developed by Ibrahim M Amody and the school Automated Alarm system developed by Abubakar Abdulahi, the students of the secondary institution also developed an FM Radio Transmitter that can cover a radius of 2 kilometers. 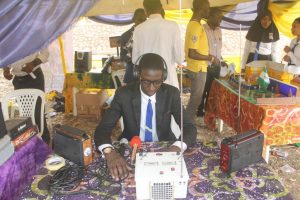 The FM Radio Transmitter was developed by Ibrahim M. Amody, who is also a member of the Zaria Academy JET Club.

Ibrahim said with this system they can transmit only within a very short range amongst themselves. When Procyon News asks him why it can’t go beyong this range, He said though the have they have the Knowles to create one that can go beyond this range the school will need clearance from the government before that can be done. 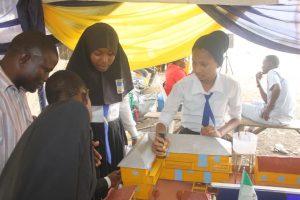 One of the most amazing creations at the Zaria Academy pavilion was the “Smart Automated House/Estate” . This module which was on display has a fully automated system of security which has a perimeter laser intrusion alarm system, symulated security/outdoor light system, automatic gate control system and water circulatory system.

The system was developed by two female students of Zaria Academy JETS Club, Khairat Abubakar and Fatima Tukur. While explaining the functions of the Automated House, Khairat said the intrusion alarm system make the house safe as the occupants and security guards will immediately be alerted wheneve any intruder breeches the perimeter fence with a high picht sound.

Fatima, said the outdoor light of the house or street lights are controlled by luminous sensitive sensors which automatically turns on the lights when the sun is going down and turns it off at daybreak.

The advantage of the automated system is that it saves the occupants cost of power supply and ease of mind.

The water supply systems also make it possible to fill up the water tanks without the need for humans to physically monitor the water reservoirs because the sensor detect when the water level is low and fills them up, the sensors also stops the pumps when the tanks are full.

The school management also told Procyon News that these ground breaking inventions may not have been possible without the highly commendable efforts of the Old Students who provided a solid and enabling foundation in Generation, Invention and Execution of ideas at the inception of the JETS CLUB at the Zaria Academy.