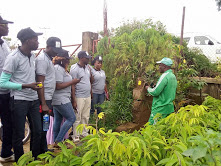 In view of the above, the organizations is organizing a 2-week Educational Exchange visit program between Kaduna and Plateau States youths to under-study conflict experiences of the state, interact with conflict parties, conflict management actors and draw lessons learnt from the positive roles they played in the conflict history of the state.

Coordinator, Early Warning and Early Response, IMC, Mr. Samson Auta, disclosed this to newsmen when the two Teams from Plateau and Kaduna States visited Teku International Farm on Tuesday , August 7, 2018 to explore the opportunities of engaging the youth on useful ventures that will add value to their lives.

Auta said IMC was at the farm with the youth Team from Jos, Plateau state, North-Central Nigeria under the funded project from Nexus.  Nexus fund works on areas  that has to do with forestoring peaceful coexistence, especially focusing on issues that relate to hate speeches.

He added that the project is to see how religious, traditional leaders and stakeholders can both work to see how they could end the narratives that promote hate speeches among various ethnic, political and religious groups so that there could be peace in our society, invariably, peace within the states and the country at large.

According to him, the goal of the activity is to further strengthen the conflicts coping I capacity of Plateau and Kaduna states youth leaders towards a diverse inclusive, harmonious coexistence devoid of hate speeches and mass atrocities owing to the fact that exchange visits offer a bundle of benefits, well beyond just acquiring information on the host.

“Yesterday, the teams were in Maraban Rido and Kabala West in Chikun and Kaduna Local Government Areas respectively, where they interacted with members of the communities. Experiences were shared on how they are able to live together even though they have ethnic and religious differences.

” The Team from Jos gained knowledge and skills on how to deal with conflicts, hate speech and demonization of one another especially as the 2019 general elections approach.

“Plateau amd Kaduna States have had its own share of civil strives and violent conflicts, though very well managed, with lots of potential success stories for others to learn lessons from.

“Key actors like the two umbrella bodies of the major religious groups, i.e. the Christian Association of Nigeria (CAN), the Jama’atul Nasril Islam (JNI) political, the security, women, men and especially the youth groups would be constructively engaged in in-depth interactions to examine how and why they succeeded in their interventions, to serve as lessons learnt for adoption and referencing.

“During the visit, selected 5 participants from Plateau State comprising of men, women, Christians and Muslims accommodated in a hotel would on daily basis, be visiting and interacting with communities that were affected and destroyed by violent conflicts and now rebuilt with a view to studying their post conflict cohanisms and reintegration strategies.

“In a like manner, Plateau State would also reciprocally host 5 selected participants from Kaduna to the same activities on the Plateau, that will culminate into capacity development training for the participants on countering violent extremism in Kaduna and Plateau States respectively.

“At the end of the visit, the teams shall feature on the media to further discuss their findings, share experiences and create more awareness on hate speech, mass atrocities, violent extremism and ways forward,” he said.

According to Samson , The goal of this activity is to further strengthen the conflict- coping-capacity of the Plateau and Kaduna states Youth leaders towards a diverse inclusive, harmonious coexistence devoid of hate speeches and mass atrocities owing to the fact that Exchange visits offer a bundle of benefits, well beyond just acquiring information on the host.

He ended by saying that Trees planting can be used in fighting desertification,Global warming,deforestation, and also find means of ending bloody clashes between  Farmers and cattle breeders

A participant from Jos, Felicia Ayanwale, was excited on what she saw at Teku Farm, especially as she discovered that the species of economic trees at the farm like; apples, oranges, guavas, grapes, mangoes, Tangerines among others could be planted in by the verander and harvested within six months.

She said there was no reason for youth to be lazy with these discovery, noting that with conflicts everywhere and people scattered in IDP camps, one could still engage in farm planting business to earn little income instead of waiting for white collar jobs which are no longer visible, or be used for antisocial vices by politicians especially as the 2018 general elections is at the corner.

According to Anyanwale, farm planting business can serve as a source of employment opportunity for thousands of youth, which could add value to their lives, and also preserved our environments by way of fighting desertification.

“Women in particular should be encouraged to go into farm planting since one does not need to possess a farmland before it commences. The little spaces outside the homes we neglect could be converted for the purpose especially as the plants start bearing fruits within six months.

“Going by what President Muhammadu Buhari has made for Nigerians to go back to farming, I think horticulture or plants  farming is the best,” she said.

She then called on all Youth across the 36 state of Nigeria to immensely  engage themselves into farming and  horticulture  business, so  as to end  poverty and unemployment that is contributing in creating security chanlleges

While appealing to wealthy individual, and  corporate organization,NGOs and CSO  to support youth in going back to agriculture

In his own remark ,the Director of Teku International Farm Kaduna, Ibrahim Salisu,said  it is really importance to draw the attention of all  Nigerians and Africans on the need to team –up and fight against desertification and climate change  that is disturbing peace stability through trees planting in the Northern Nigeria, other to save the environment from all  forms of threat related natural disaster,Climate change,flood,earth-quake ,

He stated this when he received youth teams from Plateau State, North-Central Nigeria, in company of their Kaduna counterparts at his farm

.According to him, the increasing demand for firewood and charcoal for domestic use is a threat to the existence of forests in the country; noting that the continuous felling of trees has led to threat to wildlife, thereby forcing them to migrate.

“Climate change is real, hence the need for both the state and federal governments to double up efforts in the fight against global warming through planting of trees,” he said.