Chairperson of the Northern Governors Wives Forum(NGWF) and wife of Bauchi state Governor, Hajiya Hadiza M.A. Abubakar yesterday inaugurated a multi million naira Sokoto state Occupatinal Theraphy and Youth Development Centre with a call on wives of governors to initiate a responsive collaboration to end the menace of drug and illicit substance abuse especially among women. 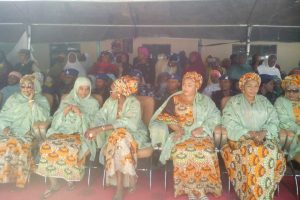 She described the newly inaugurated centre as part of efforts to tackle drug abuse and addiction in the region.

Hajiya Abubakar disclosed that the Forum had since initiated a collaboration with the senate for an anti drug abuse and control Bill‎.

She however, commended the first lady, Mrs Aisha Buhari for her unflinching support to the purposeful Forum while stressing that all hands must be on deck to enable a drug abuse and addiction free‎ society.

” we must intensify efforts in driving our vision for a sane and sound society by introducing relevant programmes in our respective states.” 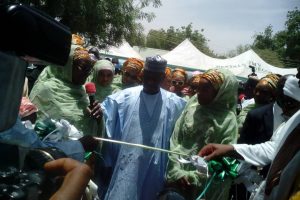 Earlier, wife of Sokoto state Governor and host, Hajiya Mariya Aminu Waziri Tambuwal who expressed concern at the spade the menace was fast affecting the mental balance and  social lives of northern population, called for massive awareness campaigns at state levels especially in the region.

She said a marshal plan has to be on course by the 19 northern governors wives to strategically partner and actively work with NGOs to stem is pursuit against the negative trend of drug abuse and addiction on women and youthful Nigerians.

” Our commitment and resilience will recognise the inclusion of our traditional and religious leaders particularly in the north where the ills is alarming”, She stressed.

Delivering his speech, Governor Aminu Waziri Tambuwal who commended the Federal Government for heeding to his call to ban the production of codeine, pledged ‎to sustain support to the Forum.

According to Tambuwal” We have introduced various programmes and measures that led to identifying and closure of codeine and other illicit substance sales points ‎within the Sokoto Mammy Market.”

He continued:” Is one of the instrumental moves that encourages our fight against abuse and addiction by women and youths in the state.”

The governor further commended the Forum under the leadership of Hajiya Abubakar and supported by Hajiya Mariya Aminu Waziri Tambuwal.

The event attended by representative of Sultan of Sokoto‎ who is the Ubandoman Sokoto Sabon Birni, Alhaji Muhammadu Malami Maccido dignitaries and politicians was thrilled by Alhaji Babangid Kaka Dawa and other local musicians with rendition against drug abuse and addiction among women and youth.