On 31/01/2017 as she arrived Kano, being a Princess, she paid homage to the Emir of Kano Mallam Sanusi II at his Palace where she introduced her mission in the State. The Emir thanked her for the courage and assured her of adequate support for the campaign to survive. She then paid homage to the Mother of the Emir at her residence. The POWA National President then proceeded to Bompai Police Barracks where she launched a campaign tagged Our Barracks Must Go Clean. She called on the inhabitants of the barracks to embrace both environmental sanitation and personal hygiene to stay healthy. She donated sanitary items such as soaps, Izal, detergents, hypo, pads, brooms etc. 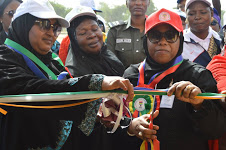 2. On 1st November, 2017, she led a procession along State Road Kano down to Government House Kano with a view to express her sadness against child molestation as the highest striving crime in our society. At the Government House Kano inside Coronation Hall, the campaign against Drug abuse and youth empowerment was launched. In her address, she called on Parents, guardians and all good meaning members of public to rise up against the menace of child molestation and drug abuse for the younger generation to live a fulfilled life.
On his part the representative of the Inspector General of Police AIG ZONE Kano expressed dismay at the rate in which crime against children is on the rise every day. He assured her that, the Police will always investigate, detect and diligently prosecute all offenders of such acts.
The State Commander of National Drugs Law Enforcement Agency (NDLEA) also spoke on the effects of drugs saying that majority of crimes are influenced by drug abuse. He called on all good citizens to support the fight of the current government against drug abuse in the country.
The Launching was attended by cross-section of NGOs, CSOs, Children from both public and Private Schools, and Youth from various higher Institutions etc.
3. She then proceeds to Mobile Police Barracks Hotoro, where she commissioned a mini In-Patient Ward at the Police Clinic that was recently refurbished by the State POWA and named after the POWA National President.
4. During the event, the State Chairperson POWA, Hajia Salma Rabiu Yusuf also called on all good members of the public to respect the sanctity of children through giving them parental care and attention at all times. She called specifically on mothers to avoid drugs as it would affect their lives and the lives of their children. While male guardians, Teachers, Neighbours and any other person were warned to desist from any act that may infringe on children.