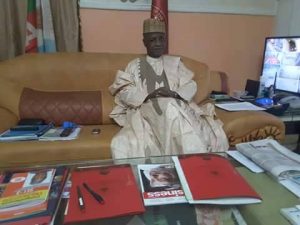 Senator Aliyu Magatakarda Wamakko, representing Sokoto North Senatorial District has urged outgoing corps members across the country to strive to be patient, patriotic and diligent in their future endeavours.
‎
He described NYSC scheme as a major contributor to sustainable national integration, peace, unity and development.
Senator Wamakko who is also the Chairman of the Senate Committee on Basic and Secondary Education spoke Saturday when some outgoing corps members of the 2016 batch B, Stream two,   paid him a farewell visit at his Gawon Nama residence.
The APC Senator’s remarks were contained in a statement signed by Bashir Rabe Mani, Special Assistant on Media and Publicity to the Senator and issued to reporters in Sokoto. 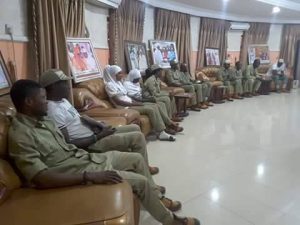 According to Wamakko, such noble virtues  are the formidable keys to success, whether as future employees or employers of labour in the public and private sectors.
He also admonished them to continue to be good ambassadors of the National Youths Service Corps scheme, their respective families and Sokoto State.
‎
In their farewell remarks, the corps members told Senator Wamakko that the visit was to appreciate the him for his invaluable contributions to the scheme in the state and Nigeria in  general while describing Sokoto State as the most peaceful in Nigeria with a pledge to make the state their second home
Share
0
SHARES
ShareTweetSubscribe