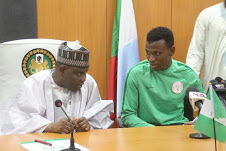 Tambuwal announced the donation while receiving the star player who participated in the ongoing FIFA World Cup in Russia at a courtesy visit he paid to the governor in Government House, Sokoto.

The governor also directed the state Commissioner for Lands and Housing to identify a suitable land for the construction of  a sports complex to be named after the Eagles player.

The Governor appealed to the youths in the state to develop their skills and excel like Shehu while  reminding them that sports has multiple benefits to their survival, adding that” It is a veritable  business avenue and for health development”, among others.

He further challenged them to be involved in sports rather than thuggery so as to legitimately earn a living and respect for selves which in turn would add value to the society.

However, the governor said that Sokoto state was proud of him and assured him of Government’s continuous support and encouragement.

Earlier,  the Super Eagles player, Abdullahi Shehu thanked the Governor for his contributions to sports development in the state and assured of total support of youths to his Administration .

Accordingly, Shehu while commending the Governor for his efforts at developing the education sector in the state, announced his determination to execute ‘Legacy Project’ (sports complex) in collaboration with philantropists in the state.

The  eagles player also informed the Governor of their plan to organize a charity football involving Super eagles players in Sokoto and called for the state government support and assistance.

He also lauded the state government efforts at tackling the menace of drugs abuse among youths in the state.