Sokoto seat of the caliphate was agog with people and activities, particularly around the Sultan’s palace and surrounding areas when the Benin Kingdom shifted base to visit the ancient city. It was for a testimony and to identify with the caliphate for obvious cultural and traditional reasons of common interest.  The duo have common heritage history of ascension as ADO HASSAN captures at a glance, the four day historic royal fraternity that also underscored issues of national interest as unity, peace, security and harmony.

FOR the first time since his enthronement a year ago, the Benin Kingdom paramount ruler, His Royal Majesty, Oba N’ Omo N’Edo Akpolokpolo Ewuare II left his domain on a visit to Sokoto, seat of the caliphate.

He arrived the ancient and historic city in a private Jet via the Sultan  Abubakar III International Airport, Sokoto amid anxiously waiting crowd to receive him at about 6pm on Sunday the 26th, November, 2017. 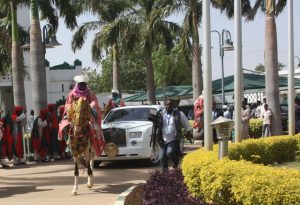 As the Monarch alighted from the aircraft, already the Sokoto state cultural troupes and various other traditional dance entertainers were already displaying various dance styles and steps to usher Oba Ewuare and the large delegation on his entourage.

Similarly, Oba Ewuare had hardly approached the vehicle to convey him when he  was caught in the web of the joy of well wishers who could not hide their tenacity to catch a glimpse of the person of Oba Ewuare II, and of course, his eye catching metalic white Rolls Royce was a centre of attraction for the crowd which cuts across communities especially his kinsmen in Sokoto.

It dawned on the Oba that it was more of a home coming to the revered palace after been driven in a motorcade from the airport, some kilometres from the city where he spent four un-interupted  days of royal treat organised by His Eminence, the Amirul Muminin, Sultan Sa’ad Abubakar. 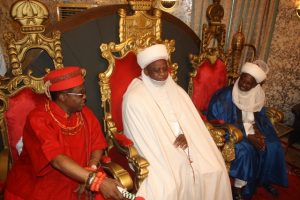 However, the Oba’s visit to the caliphate, followed a similar visit to President Muhammadu Buhari in appreciation of his spectacular show of love, affection and support to him during the process of his coronation as the 40th Oba of the Benin Kingdom.

Beyond the exchange of banters between and among the high and low within the circle of the royals on arrival in the palace, Ewuare II’s visit to the Sultanate was purposely to appreciate in reciprocation of the unprecedented support, honour and encouragement of His Eminence, Sultan of Sokoto,  Muhammad Sa’ad Abubakar III and the Sultanate at the Benin Monarch’s official coronation and presentation of staff of office as well his first year anniversary.

Oba Ewuare II’s visit to the caliphate was thrilling and exciting, leaving behind memories and joy among many indigenes and resident communities particularly his kinsmen resident in Sokoto.

However, the august visitor had the best of times sharing moments with his host since arrival in the ancient city with a large delegation of top class chiefs, family members and personalities including the immediate past Inspector General of Police, Solomon Arase.

The Emirs of Gawandu, Iliyasu Bashar; Argungu, Sama’ila Muhammadu Mera and that of Gumi, Lawal Gumi were personally at hand to receive Oba Ewuare II at the palace of the Sultan which wore a befitting look in demonstration of the tie and similarities of the monarchical heritage of the two settings. 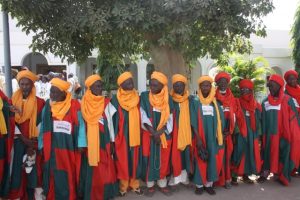 Besides, history was revisited when the host, Sultan Abubakar III recalled with nostalgic feel that his late father, Sultan Abubakar was conferred an Hononary Doctorate Degree by the University of Benin and subsequently,  then Oba of Benin visited Sokoto with Oba Ewuare II, then a young prince which is exactly 40years now.

” Today the two of us are now occupying the thrones”, Sultan said.

However, on arrival , Oba Ewuare II was thrilled to a durbar organised by his host to further demonstrate royalty,  cultural heritage and love for him.

Quite an appreciable number of horses and riders were beautifully dressed in multi coloured regalia in the conventional way and tradition thus did what they knew best to add glamour to the Oba’s arrival as a welcome norm to a respected royal figure.

The display of royalties was not in short which however, captured the Oba’s memory  to quickly recall by saying ” I recollect with fondness the spectacular display of royalty, culture and tradition when we were entertained with a mini durbar during my coronation. It is equally gratifying to note that the full durbar was displayed during the recent one year anniversary of my coronation.

” The beauty of that grandeur is still fresh in our memories. For this and many more areas of support”, noting that the warm disposition has been on , even before I had the honour of being enthroned as Oba. ” I am indeed grateful”, he recalled. 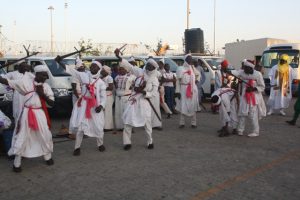 As it were, Sultan Abubakar did not leave anything to doubt, hence, conducted Oba Ewuare II to strategic places of monumental history in the caliphate.

Not unexpectedly, Sultan Abubakar organised his District Heads and key members of his council for a brief interactive session with the Benin Monarch who felt honoured.

Knowing the foundation upon which the caliphate was built: Justice, Equity, Fairness, Education and Leadership, Sokoto History Bureau(SHB) was foremost historical hub visited by the Benin Monarch in company of his host where he was conducted round and shown the collections of relics, monuments, scholarly works and many historical components of the caliphate.

Similarly, Oba Eduard II was led to the Government House, Sokoto by the Sultan and senior members of the Sultanate council  to  pay a courtesy visit on Governor Aminu Waziri Tambuwal who along with his Deputy, Ahmed Aliyu Sokoto received the Benin Kingdom Monarch. 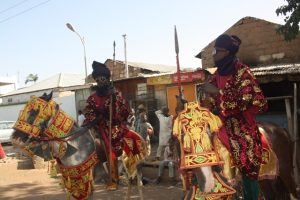 Tambuwal who hailed the role of Benin Kingdom in fostering national unity also urged the traditional institution to use their status in the promotion of good governance and strengthen the unity of the nation.

” You have what it takes to galvanise Nigerians towards peace, stability and progress. I have said it severally that we have every reason to remain together despite our differences. Our diversity is our source of strength”, the governor stressed while advocating the sustenance of visits among traditional rulers.

Accordingly, the monarch’s last point of visit was the Sokoto state University at which he inspected the facility and was hosted to a brief session with the institution’s authorities led by the Vice Chancellor, Professor Sani Muhammad Dangoggo who reeled a brief history of the institution that was licenced in 2009 and began academic activities in 2013/2014  leading to the graduation of its first set of students.

The bond of relations between the two royal thrones’ occupants has not failed the expectations of Nigerians waiting to hear statements and remarks on sensitive national issues.

For the visiting King, the traditional institution remains the nucleus and back bone of peaceful co-existence with a call on traditional rulers to extend support to the Federal Government in harnessing the potentials in culture and tradition for the greatness and unity of the country as an indivisible entity.

He noted that Nigeria is a great country with unlimited and untapped potentials that can forge its growth and development.

” We must join hands and work to uphold its integrity. Nigeria’s unity is paramount and should be indivisible by promoting cultural exchange programmes to consolidate our cultural interactions.”, urging Sultan Abubakar not to relent at ensuring the continued unity of the country, saying” I urge you not relent, as history will be kind to you when the story of a united, strong and prosperous Nigeria is being told to generations yet unborn”

In his remarks, Ewuare II said University is a veritable tool through which knowledge can be acquired to promote the image of the country through research.

” It is an avenue to prepare the future generations for knowledge and information as source  of power”, he added.

Excited by the facilities and structures, the Benin Monarch assured of his readiness to encourage students from Edo state to take advantage of Sokoto state University to drive and achieve their quest for knowledge.

On his part, Sultan Abubakar persuaded the monarch to personally sponsor Edo state indigenes to come and study in the University.

” It will further strengthen the bond of cultural heritage and peaceful coexistence”, describing the Benin Monarch as a new dawn for a prosperous beginning for not only Benin people but Nigeria in general.

” Whatever is good for our people, we try and do it to maintain the cultural and traditional practices that seek to promote respect. The traditional institution has been existing from time immemorial in the spirit of love and concern the people”, the revered leader pointed out.

Though, Oba Ewuare while expressing concern the trend of crisis, noted that for some time, is being faced with huge security challenges occasioned by  attendant humanitarian crisis of unimaginable proportions.

” It behoves on us as traditional rulers to constantly imbibe in our people the need to respect our cultural values which teach and respect for one another and it is my hope that we will continue uphold those values that unite us as a country.”

However, the Benin King who granted brief audience to journalists in response to question on the menace of trafficking in Edo state at the Sultan Abubakar III International Airport, Sokoto shortly before departure for Benin said a lot is being done to end the menace of trafficking in person in Edo state through holistic arrangements for the establishment of factories to provide gainful employment for youths.

” We are equally strengthening measures and mechanisms to come up with a Foundation in collaboration with local and international NGOs  through responsive synergy to address the trend.

” We have started a process with an NGO from Denmark to discourage the temptation of trafficking in person in Benin. An ordinary NGO cannot provide lasting solution beyond  mere palliative.”

According to the Monarch” I personally started the crusade when I was an Ambassador to Rome. We did alot of work to discourage the practice which was intense in Italy”, he recalled as he approached the aircraft to bid bye to his host and other personalities that saw him off