The National leadership of the JOHESU and Assembly of Health Care Professionals declared industrial strike action on 17th April ,2018 and directed the states , FCT and local government to join on 9th May,2018.

Accordingly the unions said ,in line with the national directive for states and local government to proceed on strike and addition that the state government rebuffed ,what it termed ,” Patriotic diplomatic shuttles ” to them to resolve the issues in convention ” 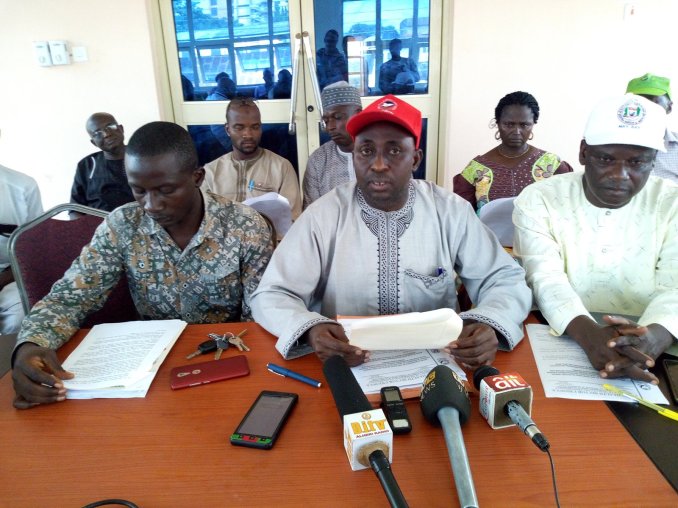 Briefing journalists on why the unions decided to joint the strike , the State Chairman, Comrade Ayuba Suleiman said the unions have no option than to join the strike after exploring all possible avenues of negotiations .

According to Comrade Suleiman , the unions demanded , ” State Government should issue a circular for implementation of the balance of 30 per cent Consolidated Health Salary Structure (CONHESS) for the State and Local Government Health Workers” .

He also said all statutory and professional dues deductions such as ; Pension, Taxes, National Housing Fund, cooperative contribution, Union Check-off dues among others should be remitted without further delay to the appropriate institutions.

While asking the State Government to domesticate court judgment in favour of Medical Laboratory Scientists from the National Industrial Court in Kaduna State (Barau Dikko Teaching Hospital Kaduna), he lamented ,“It is with pains in our hearts that we are drawing the attention of our members, consumers of health services and the general public that just like the Federal Government not showing any sign of commitment by addressing the issues placed before them by the National Leadership of JOHESU, one month after the strike started; the Kaduna State Government has also not demonstrated any serious commitment to the domestic issues placed before them as our last meeting with government on Thursday, May 17, 2018 ended up with promissory note without any offer.

“We want to place it on record that the Leadership of JOHESU in Kaduna State has gratuitously offered an extra 9 days olive branch outside the time frame for the commencement of the strike which was May 9, 2018 just to enable the State Government to address the issues in contention but the gesture has not been well appreciated by the government.

“In line with the national directive for States and Local Governments to proceed on strike with effect from May 9, 2018 and, in addition to the fact that the State Government has rebuffed our patriotic diplomatic shuttles to them to resolve the issues in contention.

“In view of the above, Comrade Suleiman said JOHESU Kaduna State Chapter has directed all her members in the State and Local Government Health Institutions to commence the JOHESU strike midnight of Friday, May 18, 2018 unfailingly.”