By most standards, Ezekiel is living the middle-class Nigerian dream. At 41, he works as a senior manager at a Lagos-based media company where he earns a healthy salary. He also runs a successful side business importing and selling American used cars and has enough money to fund his wife and two children on annual holidays in the United States. He also owns his home—the ultimate upper middle-class status symbol in Nigeria.

It might not be an extraordinarily lavish life, but it’s the kind millions of poor and lower middle-class Nigerians aspire to and work so hard to attain. But it’s not enough for Ezekiel—he’s happy with his life, he’s just not happy with where he’s living it.

Ezekiel is one of the thousands of comfortably middle-class Nigerians looking to uproot their families and plant them across the Atlantic. For many, that desire is borne out of growing frustrations with living in a country where basic amenities can often be a luxury despite the trappings of a middle-class life.

Despite Nigeria’s vast oil wealth, electricity supply is far from regularand makes life miserable and expensive. Middle class Nigerians can end up spending up to three times more running petrol or diesel power generators than they do on electricity bills.

Hospitals lack equipment or drugs and often end up with no staff due to frequent strikes by health workers over low wages. When the workers aren’t on strike, Nigerians dying of a lack of oxygen at hospitals is an all too familiar tale. And if there was any doubt about the state of Nigerian healthcare, there was the sight this week of president Muhammadu Buhari, getting on another flight to London to visit his doctor, for third time in 15 months. Then there’s the general insecurity with terrorist threats from Boko Haram and herdsmen attacks in key pockets of the country. But there’s also a fear of kidnapping and robbery, now a daily reality for the middle-class in major cities and the Nigerian police force—the worst in the world—is unreliable.

The recession of 2016 has left many unconvinced about the prospects of an economy once touted to be among the world’s most promising and the repeated failings of political leaders also inspires little confidence for the future. More importantly, for Ezekiel, likemany others who make the move, the decision is about giving his children access to educational and life opportunities that will likely stay beyond their reach if they remained in Nigeria. In today’s fast-changing, technology-driven world, Nigeria’s educational standards are not keeping up.

While most headlines about migration from Nigeria over the past two years have focused on the thousands who take the treacherous route across the Sahara desert and Mediterranean Sea to try and reach Europe, the preferred route for wealthier, well-educated Nigerians is through a more formal path to economic immigration. While in the recent past that move has often been to the UK and the United States, today it is mainly to Canada.

Canada, which has a smaller population than the UK or the US, is at a different stage demographically. To offset the effects of its aging population—seniors outnumbered children in 2016—Canada started an Express Entry program for skilled workers in 2015 to boost its labour force. Successful applicants receive the holy grail of migration: a permanent residence permit.

Applicants are judged based on several factors including age (those between 21 and 35 stand the best chance), education level, language proficiency and work experience to determine their eligibility for the program. The entire process typically takes at least six months and it has quickly become popular among middle-class Nigerians: the number of Nigerians admitted into Canada through Express Entry between 2015 and 2016 increased tenfold—2017 data will likely show a much higher spike. With the program open year round and no cap on the number of candidates that can apply, that trend will likely continue. Canada hopes to admit 75,000 skilled migrantsthrough Express Entry this year and 85,000 by 2020. In the first two years of the program, it already admitted over 43,000 applicants and their families.

But not everyone takes the legal route.

Nigerians with visitor visas to the United States have increasinglywalked across the Canadian border in upstate New York into Quebec to claim asylum. The route accounted for 40% of Canada’s total asylum claimants in 2017 and in the first three months of 2018, more than half of the 5,000 asylum claimants who crossed the border were Nigerians. That’s set to be a marked increase on last year when a total of 5,575 Nigerians sought asylum in Canada—the second largest group by nationality. 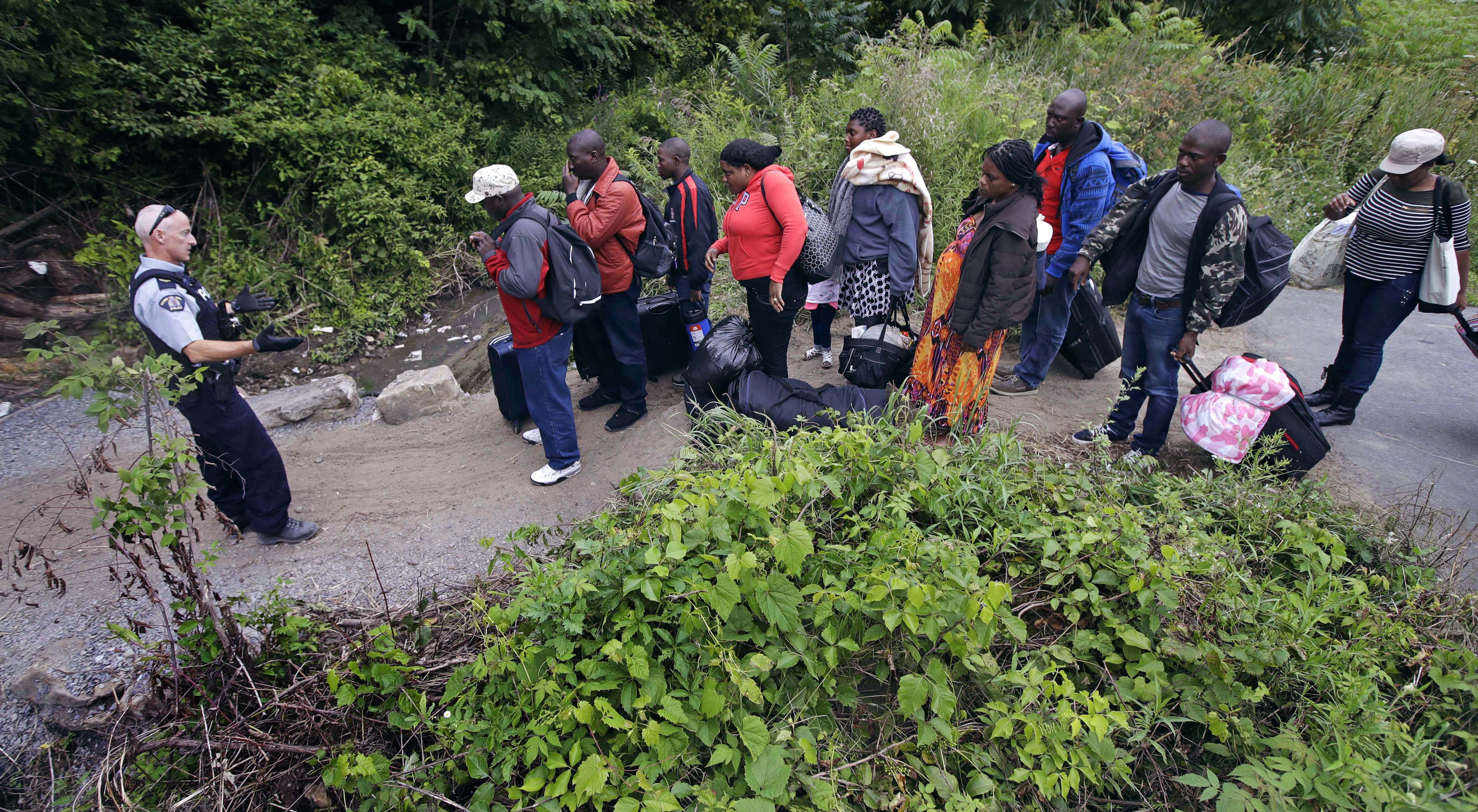 From New York to Quebec: Thousands of migrants are crossing into Canada

The choice to try to claim asylum in Canada rather than remain in the US or even go to the UK is mainly driven by the Canada’s more welcoming stance to immigrants since the unexpected 2016 poll wins for Brexit in the UK and Donald Trump in US. Both campaigns were hinged on stiff anti-immigration rhetoric. The implicit message to immigrant hopefuls was that they were no longer welcome. In Canada, it appeared to be the opposite.

A majority of asylum seekers claim they are victims of persecution by Boko Haram terrorists and based on sexual orientation—Nigeria outlawed homosexuality in 2014. Indeed, from 2013 to April 2017, Nigerians made up about 25% of claims based on sexual orientation. But the high spate and trends of LGBT-related claims by Nigerians are now raising questions that they may be fabricated. For example, around 60% of Nigerians seeking asylum claimed to be bisexualcompared to an average of 12% for other nationals.

Seeking asylum is not a fail-safe method though as a majority of asylum seekers are unlikely to meet Canada’s criteria and will face deportation. Indeed, less than 15% of asylum claims by Nigerians in 2017 have been approved while a majority of claims remain pending, have been withdrawn or rejected. In the meantime, to stem the tide of illegal border crossings via New York, Canada has urged the United States to be more stringent with awarding visitor visas to Nigerians.

The financial requirements of either route—economic migration or asylum—puts it out of the reach of many. Walking through the US-Canadian border into Quebec requires first financing a trip to the United States while the basic application fee for Canada’s Express Entry program costs up to $800. Applicants will also need to prove they can fend for themselves after making the move: that requires showing proof of funds ranging from $9,600 to $25,000 depending on the size of the family. IELTS, an English language proficiency test essential to the application, now costs 75,000 naira ($208) per sitting after a recent increase.

For Izy, a 30-year old optometrist, it cost almost six million naira ($16,600) to move to Calgary in January after getting a permanent resident permit through Express Entry. That amount covered her program application fees and settling into a new life. Starting over has not been straightforward despite the best efforts of the Canadian government who have provided settlement and employment counselors, Izy admits. Despite having practiced for five years in Nigeria, she will likely have to wait for up to four years while taking expensive certification courses and exams before being able to practice in Canada. In the meantime, she works as an attendant at a Home Depot store. But she’s happy to have made the move. “I just got tired of Nigeria and frankly didn’t see it getting better any time soon,” she told Quartz.

Settling into a new life in Canada can be tricky, says Tobi (not real name), a 27-year old I.T specialist. Getting through the “difficult initial process of finding your feet can last up to two years,” he says. Regardless, after moving to Ottawa originally for a masters degree program last year, Tobi has quit his job at a global consulting firm in Lagos and is now trying to obtain a permanent residency. Trading in a cushy job and his home country is all about “playing the long game,” he says. Despite having to rely on low-skilled jobs for survival while settling in, Tobi says social safety nets and a higher standard of life in Canada make it worthwhile unlike remaining in Nigeria, “a country where nothing actually works.”

There’s a feeling of déjà vu about the droves of middle-class Nigerians leaving or attempting to leave the country. From the late 1980s to mid-1990s, a wave of Nigerian intellectuals notably left the country to seek greener pastures abroad amid tough economic conditions and successive military dictatorships. More recently, Nigerians have tended to latch on to opportunities to move to developed Western countries through skilled migrants programs like the UK’s Highly Skilled Migrant Programme from 2002 to 2008.

Just as they do now, the prospect of better paying jobs and a much improved standard of living have proven to be strong draws over the years. Long-term, the downside for Nigeria is that many of its bright minds looking to move to Canada are intent on making it a one-way trip. “[I have] no plan to move back at all, no matter what Nigeria becomes,” Izy tells Quartz. “Not even for a visit.”

Sign up for the Quartz Africa Weekly Brief — the most important and interesting news from across the continent, in your inbox