BUSTING OF SYDICATE OF METROPOLITAN KIDNAPPERS.

Ladies and Gentlemen of the Press,
With the realization of new trend of kidnapping of children in Kano metropolitan, the Commissioner of Police Kano State, CP Rabiu Yusuf psc+ directed the Commands Anti-Kidnapping Squad to rise up to the challenge with a view of arresting the situation. The Squad re-strategized and swung into action, and with the assistance of some strategic partners, a syndicate led by Khalifa Usman a.k.a Gurgu of layin Pole Kurna Asabe Qtrs Kano was busted. Other members of the syndicate arrested are Idris Aminu of Lokon Sheshe Qtrs and Abdullahi Aminu a.k.a Sharu of Sharifai Qtrs Kano While 2 others are at large. 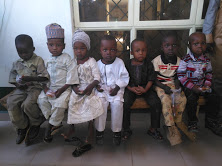 The ring leader Khalifa Usman and Idris Aminu frequent various quarters of Kano Metropolis spying on houses and kidnapping children specifically in Dandishe, Dorayi Babba, Kofar Mazugal, Koki and Gwagwarwa Qtrs. When they kidnap a child, they would meet with the other gang members, start making phone calls to negotiate with the parents for delivery of ransom. While, the child will be whisked to a far away town such as Gwarzo, Danbatta Gezawa and Sauna Qtrs where they would be delivered to the house of a Village/Ward Head as a missing child. They will then continue to put pressure on the parents to submit the ransom which usually turns to be in recharge cards of various network providers. So far, four parents had submitted to the demand and sent recharge cards worth hundred thousands of naira for the release of their wards. 7 children aged between 4 and 5yrs were rescued. 1 GSM Phone, 3 SIMs and redeemed recharge cards were recovered and tendered as exhibits. All the suspects confessed to the Commission of the crime while coordinated effort towards arresting the fleeing members of the syndicate is ongoing.
It is the candid stand of the Command to call on Traditional Institutions, Imams, Community leaders and other well meaning members of the public to make proper documentation of all persons delivering a missing child, or report same to the nearest Police Station. And Parents/Guardians are enjoined to accompany their children with an adult while going to Schools and other places. The habit of sending them on errand should be discouraged.
The Command is reassuring its determination to provide secured and conducive level ground for all Socio-Economic activities and protection of lives and properties in the State.