Necessity they say is the mother of invention. This age long cliché found relevance in Zaria Academy as a student of the institution produced and automatic alarm system for the school. 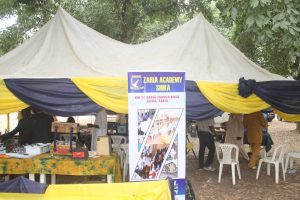 Abdulahi said “I designed the alarm system to help alert us when its time to resume, time to go on break, time to change subject and time to close. I discovered that apart from the vocational incidence of the time keeper forgetting to properly keep the time what happens if he falls ill?

“This alarm system can not be late and it saves the school the cost of employing a time keeper. It not only serve for academic purpose, it can also be programmed to sound the call to prayer”.

Abdulahi Abubakar, recommended the alarm system to all schools and institution for a more efficient time keeping.

Abdulahi Abubakar is a member of the JET Club of Zaria Academy and a part of the team of exhibitors representing Zaria Academy at the 39th Kaduna International Trade Fair.