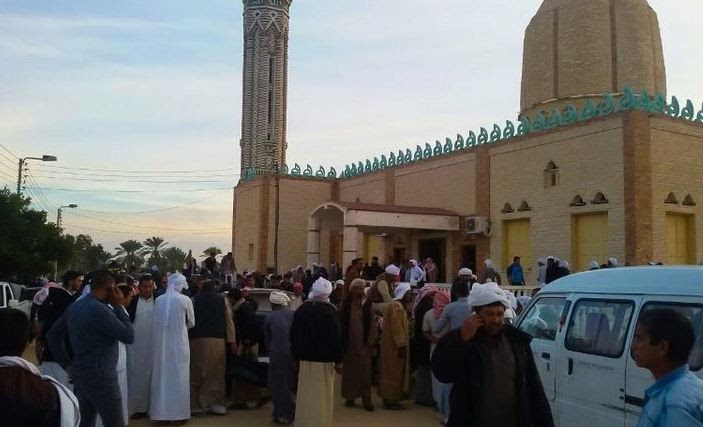 Militants killed more than 230 people at a mosque in North Sinai on Friday, detonating a bomb and gunning down worshippers in the deadliest such attack in Egypt’s modern history, state media and witnesses said.

No group immediately claimed responsibility, but since 2013 Egyptian security forces have battled an Islamic State affiliate in the mainly desert region, and militants have killed hundreds of police and soldiers.

State media showed images of bloodied victims and bodies covered in blankets inside the Al Rawdah mosque in Bir al-Abed, west of El Arish, the main city in North Sinai.

Worshippers were finishing Friday prayers at the mosque when a bomb exploded, witnesses said. Around 40 gunmen set up positions outside the mosque with jeeps and opened fire from different directions as people tried to escape.

”Four groups of armed men attacked the worshippers inside the mosque after Friday noon prayers. Two groups were firing at ambulances to deter them, said Mohamed, a witness.

The public prosecutors’ office said in a statement 235 people had been killed and 109 more wounded.

“The armed forces and the police will avenge our martyrs and restore security and stability with the utmost force,” Egypt’s President Abdel Fattah al-Sisi said in a televised address.

“What is happening is an attempt to stop us from our efforts in the fight against terrorism, to destroy our efforts to stop the terrible criminal plan that aims to destroy what is left of our region.”

Egypt later said it would delay the opening of the Rafah border crossing to Gaza after the attack due to security concerns. The crossing had been due to open for three days beginning on Saturday.

Striking at a mosque would be a change in tactics for the Sinai militants, who have usually attacked troops and police and Christian churches.