The Independent National Electoral Commission (INEC) on Thursday dispatched a letter Senator Dino Melaye notifying him that it had received a petition for his recall.

Mallam Mohammed Haruna, National Commissioner & Member, Information and Voter Education Committee, in a press statement, said the commission would inform the public on July 3 giving details of the verification exercise it plans to carry out to certify the genuineness of the signatures.

The Kogi State Government had announced few days ago that 188,588 voters, representing 52.3 per cent of the total number of registered voters in Kogi West senatorial district had approved the recall of Melaye from the senate.

The Special Adviser to the state governor on political affairs, Mr Pius Kolawole, announced this on Monday in Lokoja while addressing party members from the district. He said that the collation of signatures of voters to that effect was carried out successfully on June 17.
Full text of the statement…

The next step is to verify that the petitioners are registered voters in the Kogi West Senatorial District.  INEC will, on the 3rd of July, 2017 issue a public notice stating the day(s), time, location and other details for the verification exercise. 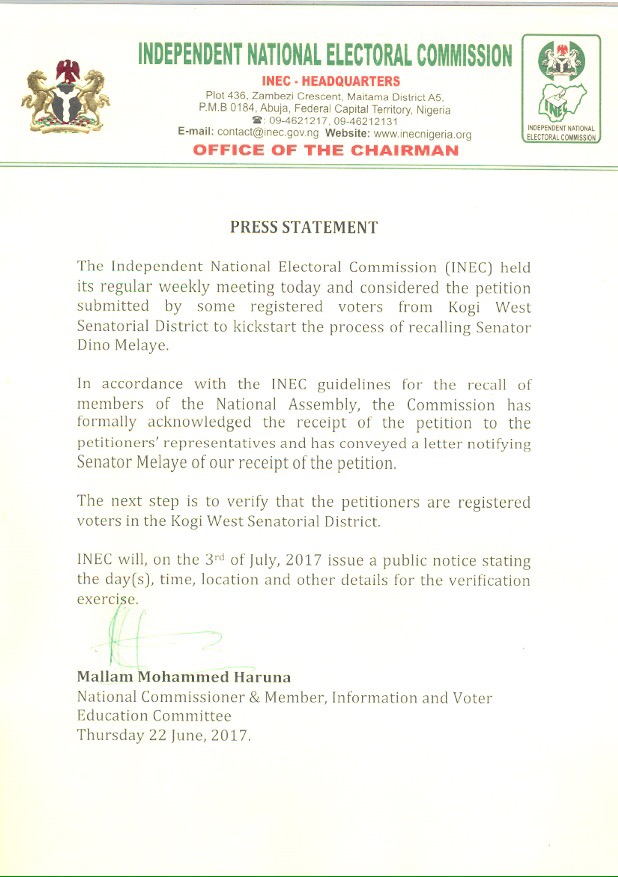