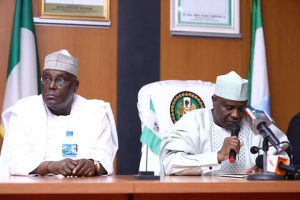 A Peoples Democratic Party(PDP) high powered delegation led by its National Chairman, Uche Secondus and all presidential adpirants of the opposition party yesterday visited Sokoto state to commiserate with the state over the recent killings of 39 persons in Tabbani village in Gandi town of Rabah local government.

Unkown gunmen had last two weeks attacked the village which resulted to the lost of lives and property this displacing several many other inhabitants.

Those among the aspirants include, former vice President, Atiku Abubakar, former Governors of Jigawa, Kano and Sokoto states, Suleiman Lamido, Ibrahim Shekarau and Attahiru Bafarawa as well as the former Minister of Special Duties, Kabiru Turaki.

While condoling Governor Aminu Waziri Tambuwal, the party’s National Chairman, Secondus on the side comments, said the visit by President Muhammadu Buhari to the Netherland was needless because Nigetia was passing through serious pains as lives were being lost on daily basis.

According to him, the visit was not a necessary course, pointing out that the president has failed woefully in the area of security.

He added that ” The ruling APC government has failed woefully. It is important that Nigerians should look on to God for intervention not the government again.”

Secondus further maintained that added that ” people now live in perpetual fear because they don’t know where the killing will happen next.

In the same vein, the party National Chairman  noted that Nigeria could not  give an accurate figure of the death recorded from January to date because what they see across the nation every day was blood flowing and blood letting which had never happened in the history of this nation.

“This is why i lead this high powered delegates to come here and condole you. We know you are in pain and we are in pain too because whatever happened in Sokoto, touches across the nation because we are brothers keepers. It is really a sad event,” he said

In his remark, Tambuwal said the state had been peaceful until that unfortunate and sad event which also displaced about 10,000 people.

The APC governor said the state government and security agencies were doing their best to ensure it didn’t happen again.

While thanking them for the visit, he said they were consoled and touched by their show of love.