LAGOS — FORMER Vice President, Alhaji Atiku Abubakar, has hinged his decision to run for the presidency once again on the need to rescue Nigeria from the destructive path the All Progressives Congress, APC, has set it. 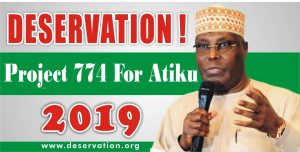 whether in the education sector, health, or in the economy, we have been going down in every statistics. That is why I have offered myself to run for the President of the Federal Republic of Nigeria in 2019,” he said.

Alhaji Abubakar, who is aspiring on the platform of the Peoples Democratic Party, PDP, was in Rivers on Tuesday where he declared his aspiration and sought the support of the Rivers State Governor, Mr Nyesom Wike.

He had said: “Since 2015, we have not seen a 100 kilometres of road constructed by the APC Federal Government anywhere in the country. I have never seen Nigeria so divided along religious, ethnic and regional lines as a result of the mismanagement of the APC,” adding that he is offering himself to set the country on the path of growth, after the serial failure of the APC. He stated that since 2015, the APC-led Federal Government has destroyed the education, health and infrastructural sectors through poor budgetary allocations and releases.

Welcoming Atiku, Governor Wike urged PDP members, irrespective of their status, to ensure that the march to the Presidential Villa was not truncated by disunity. He urged PDP presidential aspirants to contest within acceptable limits, as the race was not a do-or-die affair but a movement to oust the APC.