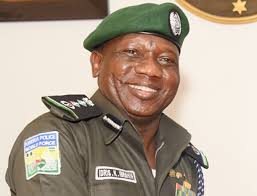 He made the commendation when he paid courtesy call to Bompai Divisional Police Headquarters, Kano, on Wednesday, 14th June, 2017.

Ahmad was led round the offices and surroundings of the Station by the Spokesperson of Kano State Police Command DSP Magaji Musa Majia and the Divisional Police Officer, DSP Daniel Amah.

In his reaction, the Former Captain expressed confidence in the Nigeria Police Force after seeing the practical transformation that took place in the Station.

He described the suspect’s cell as one of the best he had ever seen in Nigeria, Comparing it with those in the Western world in terms of convenience, facility and respect of human right.

Ahmed Musa who is very proud of being a Nigerian said, “the Nigeria Police under the leadership of IGP Ibrahim K. Idris NPM, mni is really transforming into the International Police Standard”.