Police are treating an attack at Bourke Street mall in Melbourne in which one person was stabbed to death and two others injured as a terrorist incident.

The attacker was shot by police and died later on Friday in hospital.

Witnesses said they heard a loud explosion and saw a car burst into flames outside a Target store on Bourke Street at about 4.20pm.

Graham Ashton, the chief commissioner of Victoria police, said the attacker was known to police and federal intelligence agencies. He said firefighters found barbecue-style gas cylinders in the vehicle.

“What we know so far about the individual … from what we know we are treating this as a terrorism incident,” he said. “We believe we have confirmation on the identity [and] there are ongoing investigations being conducted by counter-terrorism [forces]. I am not at liberty to disclose the identity of this person.

“He is known to police, mainly in respect to relatives that he has that are persons of interest to us” 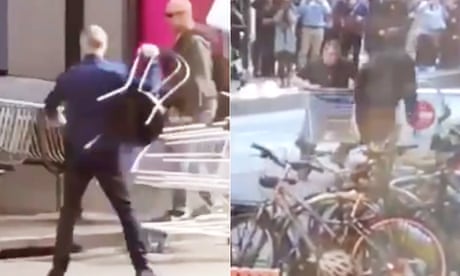 Trolley man: passers-by use chair and trolley to try to take down Melbourne attacker

Witnesses said the attacker stabbed the victim, believed to be aged in his 60s, in the face. He died at the scene despite desperate efforts to save him.

The other two victims, both men, are recovering from non-life-threatening injuries.

The attacker had history of minor drug, theft and driving offences, lived in Melbourne’s north-western suburbs and came to Australia from Somalia in the 1990s, Ashton said.

Islamic State later claimed the attack via its Amaq media agency, but there was no independent corroboration of the group’s claim.

Ashton said there was “a lot more work” to be done at the crime scene and Bourke Street would probably remain cordoned off until 9am on Saturday. He said police were not aware of any continuing threat.

Footage circulating on social media showed a man advancing towards police officers after the vehicle exploded and attempting to stab them, and then falling backwards after what sounded like a gunshot. One of the officers had their weapon drawn.

The altercation was filmed from multiple angles by several bystanders. Ashton contradicted social media reports that the attacker had yelled “Allahu Akbar” [God is greatest].

“A four-wheel drive utility [vehicle] drove into Bourke Street between Russell Street and Swanston Street and parked there,” Ashton said.

“One male person was in the vehicle. A fire was then started in that vehicle. He got out of the vehicle, engaged with some members of the public at that location. Almost within a minute, Victorian police officers were in attendance in an unmarked vehicle.

“If there are witnesses to this event, eyewitnesses, we would like to talk with them and we’d ask if they could attend any of our police stations.”

Aaksh Verma, a witness, was working when he heard a bang. He said he went outside and saw a vehicle in flames travelling towards Target. Then the police arrived. “A black guy came towards the cops as the cops were staying inside the car,” Verma said. “I’m not sure if he opened the door or if the cop opened the door.”

Once the door of the car was open and while the police officer was still sitting down, the man began stabbing him with something sharp, Verma said. He was not sure if the man made contact with the police officer, or if the officer’s vest prevented him from being stabbed. The officer’s partner got out from the other side of the vehicle and came around to intervene. “He [the man] backed off,” the witness said.

The officers attempted to use pepper spray and a stun gun to subdue the man to little effect, Verma said.

Verma said bystanders then attempted to help while the police waited for backup, one armed with a trolley and another armed with a chair.

Daniel Andrews, the Victoria premier, offered his condolences on Friday night, saying “we will not be defined by this” and thanking the police for their quick response.

“Stranger and bystanders, who knew nobody involved, stepped in without a moment’s hesitation … they too are people whose qualities make us all proud as well,” Andrews said.

“We extend our thoughts and prayers to all who are injured and extend our deepest, deepest sympathies.”

He said anyone affected by the incident should contact Lifeline, Griefline and Beyond Blue.

The Victoria opposition leader, Matthew Guy, who will face off against Andrews at the state election on 24 November, said authorities needed to “eradicate this kind of behaviour”.

“All the resources of our state should be directed towards keeping Victorians safe,” he said. “When there is a terrorism incident, there can be no moral squeamishness.”

Guy reacted angrily when a journalist asked if he was politicising the issue, saying: “I find it confronting that you would ask me whether or not I would use any person’s death to a political advantage.”

Witnesses said the police were at the scene within minutes. Neil McKeller, who works at a bookshop on Bourke Street, told Guardian Australia: “We heard the explosion and we heard gunshots later. We heard it but we didn’t know what it was.”

Surrounding buildings went into lockdown and the police blocked off sections of Bourke Street and Swanston Street, halting trams.

Meegan May, who was travelling on a tram when the incident occurred, told the ABC: “A couple of people on the trams were saying someone had a knife, and when I got up and looked through the rear window, I could see a big ute on fire driving across the road.

“It sort of came to a stop on the other side, and then I could see a man and two police sort of trying to calm him down. He was waving his arms around, someone was saying he had a knife – I couldn’t tell from where I was.”