…As Mammoth Crowd Graces Campaign Flag Off With Voters Cards

Building up to the November 18, 2017 Anambra governorship election, frontline contender and candidate of the United Progressive Party (UPP), Chief Osita Chidoka has stoutly demanded for the creation of a new state in the southeast part of the country as a panacea for the widely condemned political inequity in the country. 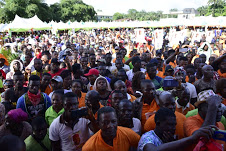 Chidoka, who spoke at the official launch of his campaign attended by a mammoth crowd in Amorka Uli on Saturday, also unveiled and presented the Isi-Agu (Tiger head) emblem of the UPP as the undying symbol of Igbo consciousness.

This direct demand for the sixth state in the southeast is significant, coming on the eve of the nation’s 57th Independence Day celebration.

A mammoth crowd of supporters, waving their voters card, went into affirmative jubilation and songs when Chidoka in the company of UPP National Chairman, Chief Chekwas Okorie, Debe Ojukwu, son of late Biafra leader Dim Odimegwu Ojukwu among others took to the stage to lift the UPP flag with its isi-agu logo.

Chidoka, who prayed God to hear the prayers of the people of the Southeast and end the numerous challenges facing the region, undertook to lead a new engagement that would end the marginalization and repression of the Igbos, vowing to champion the creation of a sixth state in the southeast as part of the renewed engagement to bring equity to the region.

“While we salute all those who through one legitimate way or the other have pursued the struggle, we state today that we are stepping into a new frontier. The Igbo voice against marginalization and injustice will not be achieved on the streets. It will rather be won with a determined engagement of our institutions of government and with other Nigerians who feel aggrieved to redefine the meaning of Nigeria and remove the inequalities that have fanned the embers of discord, and restructure our nation along the lines of justice, equality and fairness.

“To this end, my election as governor of Anambra State, will start off with a single agenda; an agenda to secure a new state for the southeast region to bridge the disparity we face. We will immediately, upon inauguration, in line with S. 8 (1) of the 1999 constitution get our National Assembly members from Anambra state, our elected House of Assembly members, and local government chairmen to sign a request to the National Assembly asking for a referendum for the sixth Southeast state.

“We will vigorously engage our friends from other states in the National Assembly and other states House of Assembly for a new state. Nigeria must take a decision on the issue of additional state for the southeast before the end of tenure of the 8th Assembly and the 2019 election”, he said, adding that when that is accomplished, he will be ready for another election.

Chidoka in his thought provoking speech maintained that there are no terrorists in the southeast, adding that the nation should not regard the Igbo quest for self determination as terrorism.

“We cannot build a great nation without unity at home. We cannot be a nation where people are hated, branded and then hounded and ostracized. We stand here to declare that there are no terrorists in our state; there are no terrorists in our region and we do not feel terrorized as a people. Indeed, without further argument, we do not believe that those who are asking for a restructured Nigeria or even for dismemberment of Nigeria are terrorists. No! They are not”, he said

Chief Osita Chidoka, the candidate of the United Progressive Party (UPP), in the November 18, 2017 Anambra State governorship election was one time Minister of Aviation in the Federal Republic of Nigeria and two term Corps Marshall of the Nigerian Federal Road Safety Corps. He is a transport specialist, seasoned administrator and technocrat. He is a proponent of the application of innovation and technology in providing solutions; and passionate about the Igbo cause.

The United Progressive Party (UPP) is a pan Igbo political party which supports self determination and the restoration of the Igbo Voice in Nigeria. Chief Chekwas Okorie Okorie is National Chairman of the UPP.

Uli in Ihiala, Anambra State is historic for having the airstrip that granted the Igbos access to supplies and link with the world during the Nigeria/Biafra war