A Social Political and Right Group Edo Orisiagbon has call on the former Edo State Governor, Comrade Adams Oshiomhole to stop his dictatorial tendency and selfish and self serving Ambition he has always used in causing disaffection among the Benin politicians.

It is no longer news that since the talkative former Governor left office in November 12th 2016 he has been desperately seeking attentions from the APC led government just to get an office that he will be recognized with. After all his desperate political exploration that couldn’t earn him any recognition, he forcefully imposed himself as the number one leader of the party at the State level using his puppets at the State Working Committee and Osadebe Avenue to announced his new office.

Realizing that the new office (state party leader) has further made him a local champion after his failure to becoming a Minister of the Federal Republic, Secretary to Government of 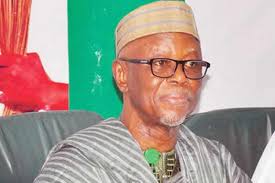 the Federation etc, Adams have since started launched his attacks on the person of Chief John Odigie-Oyegun (a Benin man) because he believes that that is the most closest opportunity for him to acquire power, Chief Odigie-Oyegun is an astute administrator who his integrity, pedigree and genuine interest have made to fortunate and placed above others to become the first Benin man to rose to the height of opposition political party chairman that have in the history of Nigeria defeated a ruling party and became ruling party.

The charlatan, Adams Oshiomhole have been engaging Oyegun using all the strategies he knows best to bring down the integrity of this humble and gentle Benin personality who rise to the height of a Permanent Secretary in the Federal Civil Service and resigned voluntarily with a perfect record. Adams have since recruited the incumbent Governor who have since lost in the political crowd of power play and turn himself to one of the Oshiomhole “yes Sir” and other of his (Oshiomhole) loyalists who a number of them are touts to continue in attacking Chief Oyegun in various media because of his desperate Ambition of becoming an office holder. If Chief Oyegun has no Political value as they are now claiming, why did their Boss (Adams) overwhelmingly received this illustrious son of ours to the ACN in 2012 at the eve of his reelection?

Oshiomhole is responsible for the bad blood that has been among the Benin political actors, he was responsible for hullabaloo between Sen.Urhoghide and Sen.Uzamere, he betrayed Urhoghide to favour Uzamere who reaped politically where he didn’t sow after he has allegedly collected a huge sum of money from the later, he caused the Ovia Federal Constituency problem that led to the defeat of Engr. Osahon because he wanted his favourite candidate to emerged, this led to the sacking of a Commissioner who testified against his preferred candidate in court, he has been perpetrating all kinds of undemocratic antics to ensure that those he can use as toy emerge, Oshiomhole fought ruthlessly to make sure that Edo North person becomes the Minister appointed from Edo State, he fought tooth and nail to make sure Edo North person becomes Ambassador appointed from Edo State, but he failed woefully in all his attempts to actualized them. After serving his two tenure as Governor of Edo State, what is the interest of Adams Oshiomhole in Edo South politics? Why is Oshiomhole interested in the down fall of a Benin man politically for him to take his place?

The Governor is acting ignorantly by turning himself to Oshiomhole puppet because he doesn’t want to be seen as a betrayal, as he didn’t know that he is currently enjoying the benefit of being a Benin man with the coverage of the Palace, but despite these facts the desperate crafty Adams Oshiomhole have surrounded him with his loyal Edo North Boys (Deputy Governor, Speaker EDHA, & Chief of Staff) as close monitors because he himself betrayed those who brought him to Political limelight and financed his election in 2007.

We are using this medium to call on all well meaning political actors who are of Benin extracts to team up together and Stop the recalcitrant Oshiomhole from further causing disunity and disaffection among the Benin breeds who are active in politics as well as closing ranks to make sure our illustrious son complete his second tenure as National Chairman and to prevail on our brother Governor, Godwin Obaseki if he will listen to the voice of reasoning, because a dog that refused to listen to it’s owner’s whistle will definitely get lost one day. However we would not allow Oshiomhole dictatorial tendency to submerged Edo State (Benin)