No fewer than 2,150‎ newly admitted students into various degree programmes for the 2017/2018 academic session were weekend matriculated by the authorities of the Sokoto state University, Sokoto with a call on them by the Vice Chancellor, Professor Sani Muhammad Dangoggo to abide by the rules governing the operations of the institution. 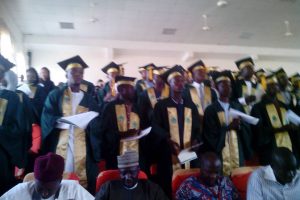 According to Professor Dangoggo, the newly inducted students were admitted across three faculties for various degree programmes out of 6, 723 candidates who applied to the institution.

The faculties include: Arts and Social Sciences, Education and Sciences respectively.

He explained that the university has 18 Departments with 23 academic programmes with 18 duly accredited and 5 with interim accreditation in addition to the Centres for Entrepreneurial Studies, Mathematical Sciences and for the study of Sokoto Caliphate accordingly.

The Vice Chancellor further remarked that the newly admitted students should count themselves lucky for securing admission into what he described as ” this citadel” of learning.

” Indeed , getting admission into this young, but promising university is not an easy task considering the number of applicants”‎, pointed out.

Professor Dangoggo in the same vein, urged the newly admitted students to take their studies serious, stressing that degrees were only awarded for hardwork and dedicated students.

” You are also to be worthy in character‎ and endeavour to shun all vices and unethical conducts as cultism, examination malpractice, indecent dressing, drug abuse and reckless driving”, he warned.

Similarly, the Vice Chancellor rolled out the university’s modest achievements to include the articulation of staff training and development programme for 380 teaching and non teaching staff sponsored to attend conferences and workshops as well study fellowship through TETFund and University interventions for national and international studies respectively.

The Vice Chancellor however, expressed gratitude and appreciation to Governor Aminu Waziri Tambuwal for his administrations untiring support and priority to the growth and development of the university in pursuit of academic excellence and worthy character attainment.

Also, the Pro-Chancellor and Chairman, Governing Board of the University, Barr. Inuwa Abdulkadir noted with excitement the progress being ‎experienced by the university in stemming it’s strides for academic excellence.

He advised the newly  students ‎to endeavour to justify their parents support by working hard and conducting themselves within the premise of the rules and regulations of the institution.

” I urge you to dedicate your selves to our studies and shun acts capable of affecting the pursuit of your ‎programmes”, he said.

Alhaji Abubakar Muhammad Dan Shehu who represented the Sokoto state Commissioner for Higher Education‎ told the students remain resilient and committed to the ideals and principles of discipline to enable them excel at the end of their studies.