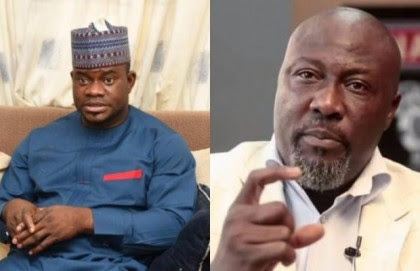 Nigeria Youth Advocacy for Peace (NYAP), a Non-Governmental Organisation (NGO), has called on Kogi Governor, Yahaya Bello and Sen. Dino Melaye, to end their face-off and work to develop the state.

Founder of the organisation, Dr Ugbede Paul, who made the call in Abuja on Wednesday, told the News Agency of Nigeria (NAN) that both leaders should also find ways to provide employment for youths in the state.

Ugbede said that the current “war’’ between the two politicians was uncalled for because there were more important things to be done in Kogi.

He said the rift between the men could be resolved without much noise and drawing attention to themselves, adding that constructive words could have been used to encourage youths’ development.

“Dino is a senator representing Kogi West, while Yahaya Bello is the governor of the state; one would think that the two ought to come together to form an alliance that will benefit the people.

“However, the reverse is the case because for days now Dino has been seeking the impeachment of the governor which is not the right way to handle issues.

“Kogi is their state and they are like brothers, so there is no need fighting each other. As the founder NYAP, I will like to encourage both of them to come to an understanding.

“If they really have the interest of the people of Kogi at heart, then this is the time to forget their differences and seek peace because without peace, there is no development,’’ he said.

Ugbede said that this was not the time to apportion blame on anybody but time for all hands to be on deck for the common good, goals and values of the people.

He urged Melaye to withdraw his comment on the impeachment of the governor and any grievance and embrace a more subtle way of channelling his complaint for peace to reign.

“If they can embrace peace, the two of them can bring Kogi to a higher place of development because youths need mentors like them.

“As youths, we appreciate them for giving us listening ears and for the progress made so far in the state. ’’

The NGO founder called on Kogi people to support the present administration in the state to do the needful in terms of sustainable development.

He urged the youths not to be polarised along the lines of Melaye and the governor, but should be assured that things would turn out good for the state. (NAN)