Following the invasion of the Senate by some suspected political thugs, the National Chairman of the Peoples Democratic Party, Mr. Uche Secondus on Wednesday declared that the development was a result of the insensitivity of the All Progressives Congress to the security issue in the country. 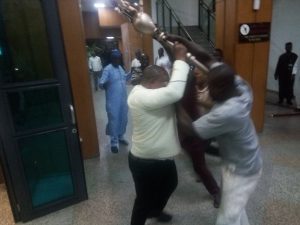 Secondus, who spoke with journalists at the Akure Airport on his way to Ekiti State, said all the political movements going on currently in the country were targeted at removing President Muhammadu Buhari from office in the 2019 Presidential election.
He said, “We are all Nigerians, I believe that all the forces are working together for the interest of this nation and at this point, we believe that the movements are for the interest of all Nigerians. The move is to rescue Nigeria from the crisis we have found ourselves
“A few minutes ago, in the Senate of the Federal Republic of Nigeria, we were informed that hoodlums forced their ways into the Senate chamber and carted away the mace. What that means is that the country is totally broken. The APC government is totally broken, there is insecurity all over the country – from the North to the East to West, people are dying on daily basis.
“So all the forces are for the interest of the country. Nigerian people are tired of the Buhari’s government.
The PDP chairman, who arrived Akure together with some national leaders of the party, also stated that the APC government had performed woefully and the PDP was now ready to takeover power, saying the committee set up for the reconciliation had done well as the reconciliation was now yielding fruitful result
“The Dickson (reconciliation) committee has been doing very tremendous jobs and the reconciliation has been very successful. So far so good the people are happy now in the party . you can see the rallies in Jigawa and Katsina States and all over the country the PDP is rebranded and repositioned to regain the power in 2019.

Meanwhile Nigeria’s main opposition party, PDP has Decried the Invasion of Senate while Accusing APC and the Presidency for the fracas.

This was contained a a statement signed by the publicity secretary of the party, Kola Ologbodiyan, today in Abuja.

The statement reads “The Peoples Democratic Party (PDP) condemns the invasion of the National Assembly and decries the seizure of the Senate mace as a direct assault on the legislature and bold attempt to truncate Nigeria’s democracy.

“We note that this offensive has been emboldened by series of interferences and direct attacks by the All Progressives Congress (APC) and the Buhari Presidency on the institution of the National Assembly, particularly the Senate.

“The APC has foisted on our nation an irredeemable autocracy, which has in three years of governance, gone beyond limits to force Nigerians to accept a government that has no respect for freedom and the ideals of democracy, particularly the constitutional separation of powers.

“Is it not strange that a legislative day appointed to further deliberate on the re-ordering of sequence of election will be the day that strange elements would invade the National Assembly, particularly, the hallowed chambers of the Senate,  to disrupt legislative proceeding and seize the mace?

“Equally strange is the compromising of security in the National Assembly paving the way for the invasion.

“The parliament, all over the world, is the bastion of democracy, without which government becomes autocratic and totalitarian.

“We urge Nigerians to pause and reflect on the series of assaults on our legislature under the current dispensation; the persecution and harassment of the leaders and members of the Senate on trumped-up charges, including declaring a serving senator wanted by the Police.

“We therefore charge the National Assembly to bring forth every legislative instrument to protect itself from external aggressions as well as unravelling every persons, offices and institutions that played any form of roles in this wild attempt to scuttle our hard earned democracy.

“Our nation has accepted democracy as the best form of governance. Those whose adrenaline cannot accommodate democracy and its constitutionally guaranteed tenets should either shape in or be forced to conform with the best ideals of democracy.”